A Song For Saturday: "Song Up In Her Head" by Sarah Jarosz

Sarah Jarosz, a nineteen-year-old Texas-native who now attends the New England Conservatory of Music in Boston, MA, recorded her first album when she was only 17!  For one reason or another I've really been getting into bluegrass lately - Alison Krauss, Nickel Creek, Chris Thile (formerly of Nickel Creek), The Wailin' Jenny's...  I've been listening to these folks for a while.  Recently I heard Steve Martin and the Steep Canyon Ranger's "Late for School" when I came across a "Listener's Also Bought" that showed me this lovely album cover: 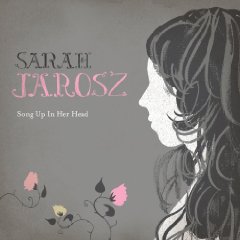 Judging a book (or in this case, an album) completely by its cover, I clicked on the link and I listened and listened and listened until I bought the album and haven't stopped listening since.  She plays the mandolin - a few different versions - as well as the guitar.  Her instrumental song, "Mansineedof" was nominated for a Grammy last year.  She has a soulful and earthy voice, and her lyrics are smart.  My favorites on the album are: "Song Up In Her Head," "I Can't Love You Now," "Broussard's Lament" (written just after Hurricane Katrina), "Edge of a Dream," and "Mansineedof."
Here is a live version of "Song Up In Her Head."
Sarah Jarosz " Song up in Her Head" from Mike Abb on Vimeo.
Email Post
Labels: love this music