You know what's not awesome?  Let me tell you the story of what happened yesterday.

I was in the kitchen.  The slow cooker insert was placed next to the cutting board.  The skillet with a couple tablespoons of oil was on the stove.  The cookbook was opened to the page with the recipe for tonights dinner: Slow Cooker Curry Chicken and Rice.

I began slicing the onions.  I was halfway through the first one when I realized my silly mistake.  Usually I'm protected from the dangerous onion gasses by my contacts.  However, I was still wearing my glasses.  My eyes were unprotected!  Sure enough, tears started forming.  A few wipes on the sleeve and I continued.  By the time I was finishing the second onion, I could hardly keep my eyes open - I could hardly see through them - and to top it all off, my glasses were covered with spots from my tears.  I was just about to put all of the minced onions in the skillet when - OUCH!!! - I cut my finger.

We have sharp knives.  Especially one of the chef's knives.  I was using this one chef's knife.  Luckily none of my red stuff got on the onions.  Also, thankfully I knew where the band-aids were and that we had some latex gloves.  I threw one of those puppies on and finished getting everything ready for the slow cooker.

A few band-aids later evening comes and the doorbell rings.  I answer it and there's sweet Ryan holding these: 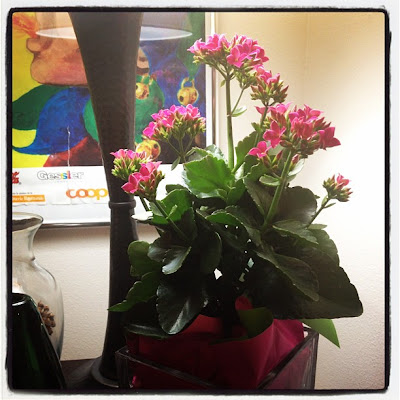 Oh, man.  I like this guy a lot.  I joked and said that if I would get flowers for cutting my finger that maybe I'd do it more often. I really won't though - being a blind, teary, and bleeding mess is not awesome.

The good news is that the dinner was really delicious, and here's the recipe.

1. Heat 2 tablespoons oil in 12-inch skillet over medium-high heat until shimmering.  Add onions, jalapeño, garlic, ginger, curry, and garam masala and cook until vegetables are softened  and lightly browned, 8 to 10 minutes.  Stir in flour and cook for 1 minute.  Slowly whisk in coconut milk, scraping any browned bits and smoothing out any lumps; transfer to slow cooker.

2. Season chicken with salt and pepper, add to slow cooker, and coat evenly with sauce.  Cover and cook until chicken is tender, 4 to 6 hours on low.

3. Break up chicken into bite-size pieces with wooden spoon.  Stir in rice and 1 teaspoon salt, cover, and cook on high until rice is tender, 20 to 30 minutes.

4. Microwave cauliflower with remaining tablespoon oil in bowl, stirring occasionally, until tender, about 4 minutes.  Stir softened cauliflower and peas into casserole and let sit until heated through, about 5 minutes. Sprinkle with almonds and cilantro and serve.
Email Post
Labels: annoying chicken pretty ryan