A Song for Saturday: "Carol Brown" by Flight of the Conchords 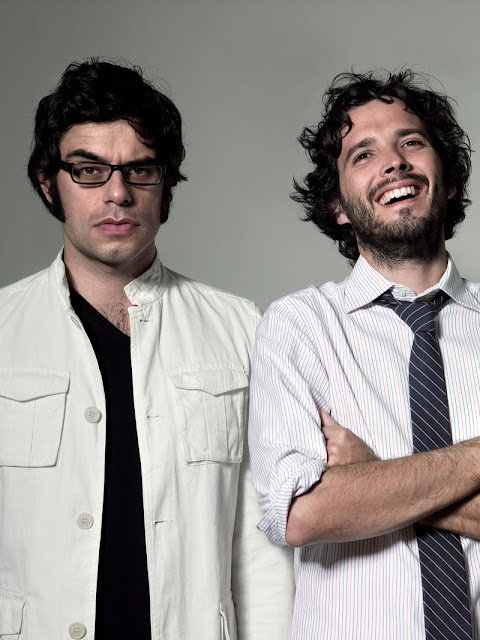 We're Flight of the Conchords fans in this house.  In fact, while we were dating, a lot of our free time was spent watching the show online, and then clips on youtube in between.  Did you ever watch it?  If not, here's a quick summary.  Two guys from New Zealand, Jemaine Clement (left) and Bret McKenzie (right) (playing fictional versions of themselves), move to New York City to try and become successful in the music business.  Their manager, Murray (Rhys Darby), is also a kiwi and works at the New Zealand Consulate in the city.  They have two American friends, Dave, who owns a pawn shop, and Mel, a crazy-obsessed and awkward fan of theirs.

Basically, because they are an actual band, there are songs throughout the episodes.  Not cheery Disney-style, though, these ones are comedic, quirky, and even a little weird.

This song, "Carol Brown," has been a favorite of mine because it's so... silly.  Jemaine likes an Australian girl, and sings a song about wanting her to stick around and reminiscing on all of the girls who have left him in the past.  The silly part comes in that all of the ex-girlfriends sing as the chorus, and Jemaine keeps telling them to shut-up.


[I can't find any way to post the video so that it'll play here on the blog, so you'll have to click here and watch it on YouTube.  Trust me, it's worth it.]

Though the show ended after two seasons, you can still find the duo touring, as well as acting (Jemaine), and writing Oscar-winning songs for The Muppets movie (Bret).


--hope you're enjoying your weekend!--